Between December 2nd, 2011 – January 15, 2012, the large scale urban screen operated by the Surrey Art Gallery on the exterior wall of the Chuck Bailey Recreation Centre became the site of Rewrite the Year, an interactive project by Melissa Mongiat and Mouna Andraos.

The installation revisited 365 headlines from 2011, starting on January 1st and going through to December. From protests, elections, conflicts, change, victories and others daily stories – the year was reflected through the lens of local and international news headlines.

During this project the public was invited to rewrite these headlines together, collectively re-examining what worked and what didn’t. Participants used text messages to rewrite sections of the headlines, one word at a time.

To learn more about the project, visit the Rewrite the Year website. 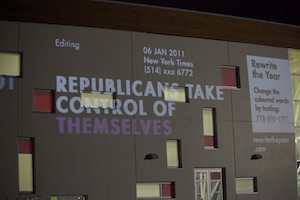 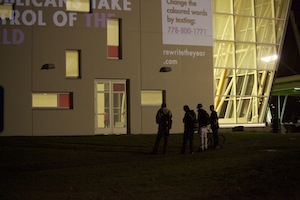 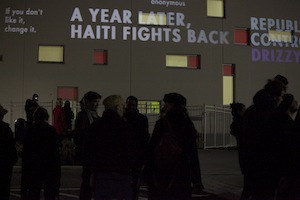 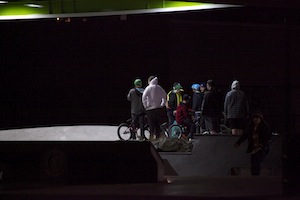 This entry was posted in Works. Bookmark the permalink.

Mouna Andraos & Melissa Mongiat
Mouna Andraos and Melissa Mongiat share a practice in participatory artworks involving audience, interaction and technology. They have created projects for PS/MoMa and Eyebeam in New York as well as London’s Southbank Centre and MUTEK. They are based in Montreal.